THE STORY OF OUR SCHOOL

Our School is eponymously named after the young Nirmal Bhartia who tragically passed away at the early age of five. Distraught with grief, his father, Shri M.L. Bhartia committed himself to doing the very best he could to illumine the educational dream of thousands of other young ‘Nirmals’ in the country.

Being a young man with limited means and resources himself, it was only decades later, after a lifetime of enterprise, labour and saving that he was finally able to accumulate the resources required to give shape to the memory and commitment that he had so carefully nurtured in his heart. The Nirmal Society for Education Promotion was established in the year 1997, and after a long period of planning and phased construction, the Nirmal Bhartia School first opened its doors in the year 2005. Unfortunately however, due to his failing health, delays and other unforeseen hindrances the new school was unable to make the start that had been envisioned.

Determined to build an institution that would do justice to the memory of the young Nirmal Bhartia, a year later his grand- daughter, Ms. Pooja Jhaver, attempted to reinterpret the poignant aims enshrined in the founding seed of the institution and restarted the school with a new and pioneering vision.

Rethinking existing paradigms together with Ms. Charu Wahi as founding Principal, the mission for the new school became one not so much of educating the largest numbers possible but rather that of nurturing a personalised and intimate learning environment akin to that of a parent’s own care. The new team thus focused upon building a close knit learning community where individual attention was guaranteed and each child felt safe, special and secure.

Similarly it was the need to ensure that no child’s educational dream was prematurely cut short that underpinned their commitment to building a truly inclusive school. A school where diverse learning styles were respected and the health, well-being and safety of children was always a paramount concern.

The final, overarching aim was to build a school that truly ‘illumined’ the educational dreams of its students. And for this, the team members came together to draw upon their shared beliefs and experiences and foster a holistic learning process that valued the learning that was had not just from books and texts, but equally from the diversity and wholeness of life itself – an entire ‘joint family’ of friends, peers, family members and the world around.

This then is the story of our school – a story of memory, commitment, determination, legacy and never giving up; and of the ambitious and passionate aims that came to shape our vision, culture and identity as a warm, caring community school. 2006. BHOOMI POOJAN
The birth of a new community. 2006. ON A MISSION
Our founding team works on a mission statement. 2007. ON THE PATH TO PRAGATI
Our very first Teachers’ Retreat. 2009. SHAPING A DREAM
Expanding our spaces 2009. AROUND THE WORLD IN  EVERY DISHA
Our first outstation trip. 2010. TOGETHER WE CAN
Change making with a new inter-school design thinking challenge 2009. A SACRED SHELTER
Practicing self governance with Ashok, Banyan, Neem and Peepal 2011. SAATH NIBHAYENGE
Our School song comes into being. 2011. VOICE OF THE HANSA
Our founding values are coined into the acronym VOICE. 2011. PROMISES TO KEEP
Investiture ceremony of our first Student Council. 2012. BLESSINGS FOR A NEW HOME
Inaugurating our new building.

2013. ALL THE WORLD’S A STAGE
Our first Teacher Exchange with Park Primary School, Bristol. 2013. MAKING A DIFFERENCE
Rated No. 1 for providing 'Individual Attention to Students' 2018. VOICE OF ART
Pioneering new 'ways of seeing' and learning.

2019. A BREATH OF FRESH AIR
Planting an air detox garden on a vacant metro plot. 2020. THE STORY CONTINUES…
Being recognised as a 'Leading School of India' 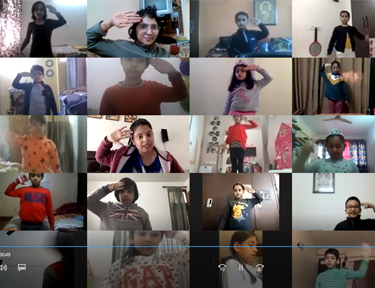 Ownership we take, of all we say,
Integrity we show, in all we do,
We collaborate, we excel and lead,
VOICE, inspires our thought and deed;
Sahi path par hamesha hum chalein,
Na ruke, Na kabhi hum darein,
Ekta sikhayenge, chetna jagayenge,
Saath Udaan bharenge hum…

The NiBS motto, ‘Together we can’ comes alive in our logo…a graphic representation of a flight of geese (hansa) on a long journey made possible only by collaboration.