Through the study of the transformative movements led by Mahatma Gandhi and Martin Luther King, Jr., students understood the effectiveness of non-violent political struggle. They saw how fearless leaders overcame the injustice of racism and other forms of discrimination without deviating from their principles. They began to appreciate the value of rights for women, the right to education and the need for liberty. Individual and group research, class debates, role play, media inputs and interaction with external subject experts were used to increase awareness and enhance the learning experience.

How did famous leaders like Gandhi and Martin Luther King Jr. plan and organize their struggles? How did they unite people and make them work peacefully towards a common goal? Does learning about famous leaders change our lives?

1. Reel to real, a film viewing session
The students were introduced to Mahatma Gandhi’s life and ideology by viewing the biopic ‘Gandhi’ directed by Richard Attenborough. Pausing the film at key moments resulted in lively class discussions and an appreciation of the difficult conditions under which India achieved freedom. The peaceful methods used by Gandhiji to reach his goals made a deep impact on their minds and after seeing the discrimination shown in the movie, they empathized with the under-privileged.

2. Walking in the Mahatma’s footsteps, a visit to the Gandhi Museum
This was followed by an immersive experience– a visit to Gandhi Smriti. This houses the Eternal Gandhi Multimedia Museum, at the location where the Mahatma spent the last 144 days of his life. Here, volunteers conducted a walk for the children and explained the significance of Gandhi Smriti. They were shown the spot where Gandhiji was shot dead on 30th January 1948 by Nathuram Godse.

3. A valuable interaction with an external resource – Dr. Soumi Roy
Dr. Soumi Roy of ‘India City Walks’ helped students gain a better perspective on the path of peace and nonviolence chosen by Gandhi and Martin Luther King Jr. to attain their goals. Dr Roy began with a discussion on their famous quotes, the similarities between their principles and the relevance of their ideas in today’s world. This interaction inspired the young historians in the class to dig deeper into the topic.

4. Designing a soft board
On India’s 70th Republic Day, to pay a tribute to the Mahatma’s 150th Birth Anniversary, students designed a soft board, based entirely on their research. Working collaboratively in small teams, they creatively depicted Mahatma Gandhi’s life, teachings and his ideology. They realized that the ongoing ‘Swach Bharat Abhiyan’ movement is dedicated to the Mahatma’s principles.

5. Articulating their thoughts
Debating the topic ‘Is the non- cooperation movement still relevant in the contemporary scenario?’, helped students gain an even better understanding of India’s freedom movement. Their arguments were well delivered and relevant.
Integrating the Hindi period with this project, students wrote essays on various topics related to the life of Gandhi. This activity enhanced their Hindi language writing skills. The topics included:

6. Organizing Information
After a few thought provoking questions about Gandhi and Martin Luther King, students worked individually on Graphic Organizers. Comparing each other’s Organizers helped in integrating and appreciating different points of view. This individual activity resulted in deeper insights into the lives of both leaders.

7. Presenting quotes
Inspired by the speeches and quotations students designed power point presentations and shared them with each other. A spirited discussion followed on ‘How Mahatma Gandhi and Martin Luther King, Jr. help us today?’ 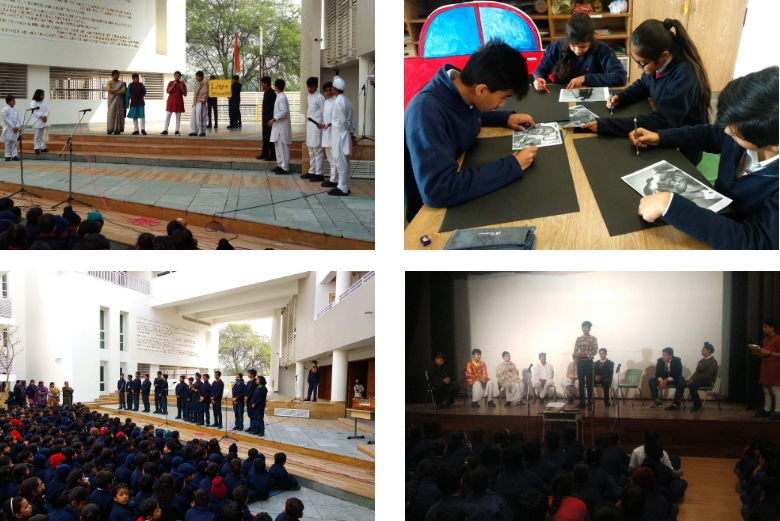 To conclude the project, students rehearsed and presented a Peace Summit to their peers and the parent body.

This has been very inspiring project for all of us. My students got an opportunity to explore the ideologies, work and contribution of both Mahatma Gandhi and Martin Luther King Jr.
Throughout the project, it was heartening to see the students read, research and expand their knowledge. The Skype session with William Johnson School, Virginia, USA was an enriching experience for us. My students spoke about the role of Mahatma Gandhi and how he changed the lives of many Indians, while the students from Virginia told us about Martin Luther King Jr.
As part of the project, we also watched the film ‘Gandhi’ by Richard Attenborough. Looking back, I feel the movie was a too long and intense to be reviewed in a day. Showing it in bits would have enhanced the learning experience. 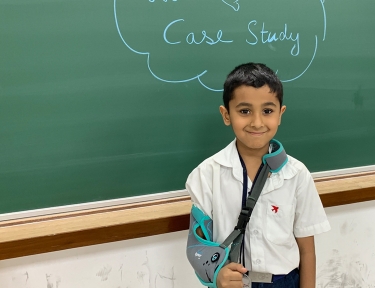 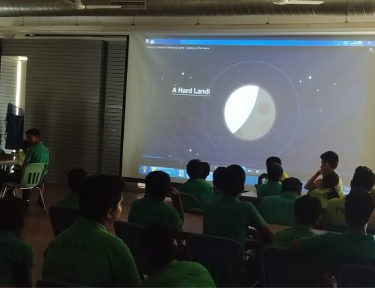 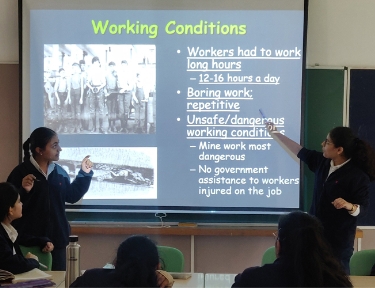 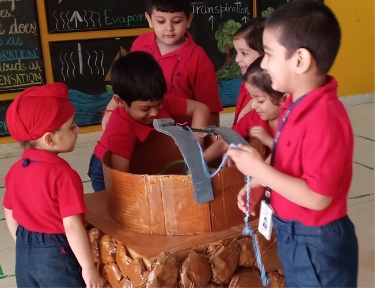 WATER, ONE DROP AT A TIME 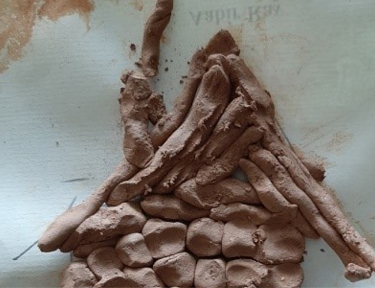 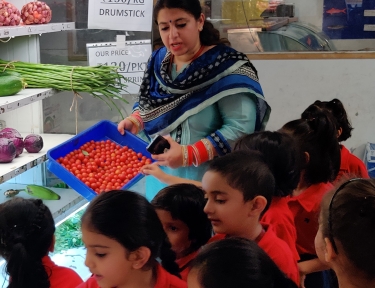 WHAT I EAT IS WHAT I AM 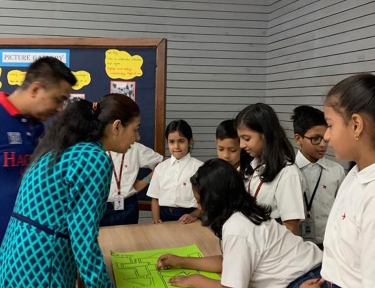 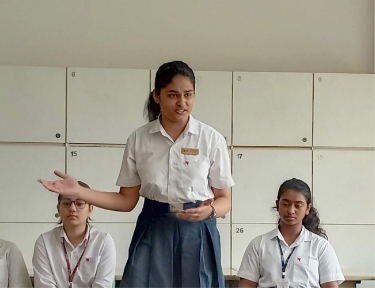 THE ART OF SPEECH MAKING

The NiBS motto, ‘Together we can’ comes alive in our logo…a graphic representation of a flight of geese (hansa) on a long journey made possible only by collaboration.

Both science and legend tell us that every year flocks of wild geese (hansa) fly nearly 3000 miles to escape frigid winters. The only way they succeed in reaching their destination is by flying together.

As each bird flaps its wings, it gives a thrust to the others in the flock, and by flying together in a V formation, the flock adds 70% greater flying range than if each bird flew by itself.

If any bird wounds itself and drops out of the flock, it is never left alone. Other geese (hansa) fly out with it lending it help and protection till it recovers and is ready to fly again.

As the leader of the flock gets tired, he rotates back and another bird takes his place as leader. Thus, with mutual support they all arrive safely at their destination – an otherwise impossible feat!

For us, the hansa in our logo express the sheer joy and power of community. People who share a common direction and work together are able to achieve goals greater and higher than if they had worked alone.